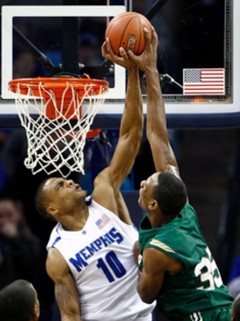 Well the Memphis Tigers defeated the UAB Blazers the other night in a Conference-USA showdown at the FedExForum.

Wesley Witherspoon scored an amazing 29 points, while Elliott Williams dropped 25 points for a combined 54 points between the two players. Will Coleman also shined as well with a key block on dunk attempt by Howard Crawford late in the second half, and an impressive seven blocks down the stretch.

The final score — Memphis Tigers 85 in the victory over UAB Blazers 75.

Though UAB was holding good in the first half, the Tigers 60 percent second half (18-of-30) from the field was more than impressive while shining also from the free-throw line sinking 25 of 28 shots to take the victory.

Wal-Mart To Build New Supercenter In Horn Lake MS, Development To Open Up Hundreds Of Jobs

Crowds Take On Black Friday Amidst News of Fight Breakouts