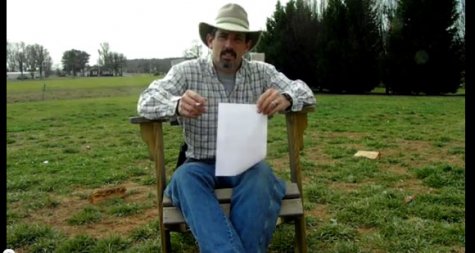 This father has landed himself and his daughter in the national spotlight for his odd form of ‘Facebook parenting,’ as it’s been referred to as – shooting up his teen daughter’s laptop on video.

This is what dad, who has been identified as Tommy Jordan, of North Carolina, believed was a punishment to his teenage daughter Hannah for a troubling Facebook post, she, identified as 15 years old, allegedly made.

Well, the father read a letter on the video which he says were the words of his daughter that she posted to Facebook.

In the letter, the daughter apparently was upset about doing chores, fetching things for her father and mother, and cursed with repetitive words of profanity directed at her parents. How did dad punish his teen daughter for this rebellious Facebook post?

He laid her laptop, a laptop he claims he invested 100’s of dollars into, on the ground then pulled out his gun and put 8 bullets into her connection to the internet, thereby making the insinuation very clear that she would not be getting online anytime soon.

In fact, dad says that when she does receive the ‘OK’ to get back online, she will be buying her own laptop/computer to do so.