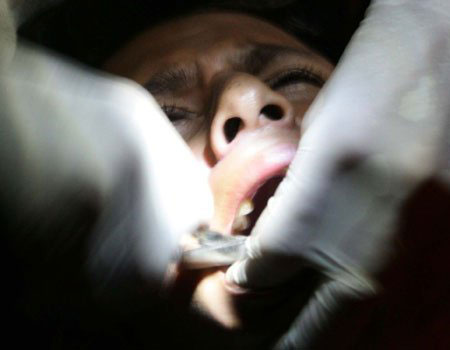 We’ve all heard our horror stories of visiting the dentist as well as horror stories of couples breaking up, but none like this. It seems that one dentist thought she would get some revenge on her boyfriend for dumping her, and what better way than to pull out all 32 or how many ever of his teeth!

Marek Olszewski, 45, thought he would let bygones be bygones and still schedule a regular dentist appointment with his ex-girlfriend, the dentist.

Marek scheduled his appointment with ex-girlfriend, dentist, Anna Mackowiak, 34, because he had a toothache, reports DailyMail.

Marek Olszewski, who was dosed with heavy anesthetics woke up and couldn’t feel any teeth in his mouth, had his head and jaw wrapped in bandages, and was told by his ex that everything was fine, adding that his mouth was just numb and he wouldn’t be able to feel anything.

Marek says he “thought she was a professional,” so he returned home thinking it was OK, only to look in the mirror later and find out what he says quote “I… couldn’t f****** believe it. The b**** had emptied my mouth.”

Anna, who works in Wroclaw, Poland, said she “tried to be professional” but couldn’t detach herself from her emotions.

Meanwhile, Marek, on top of having all his teeth pulled out which he says is going to cost him a fortune, was also dumped by his new girlfriend because she says she couldn’t be with a man without teeth.