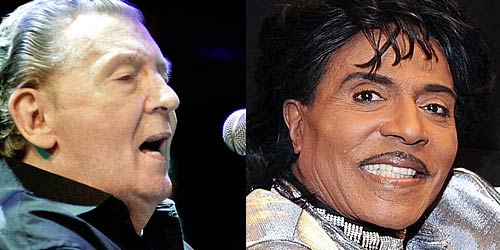 The ‘Great Balls of Fire’ Jerry Lee Lewis, 76, is being replaced with ‘Tutti Frutti’ music legend Little Richard, 79, on the Beale St Music Festival roaster, according to Memphis In May. Little Richard will be replacing Jerry Lee Lewis who is recovering from a broken leg.

Dr. Jeffrey Traina of the Community Orthopedic Clinic stated that Jerry Lee Lewis is recovering from his injury which occurred on March 30, 2012 that has had subsequent surgery and will need to keep weight off of it for at least six weeks. In addition, Jerry Lee Lewis will be unable to perform or travel for at least three to six months.

“Good Golly, Miss Molly” more than likely Little Richard will insure that there will be a “Whole Lotta Shakin’ Goin” and will perform for the both of the music icons.