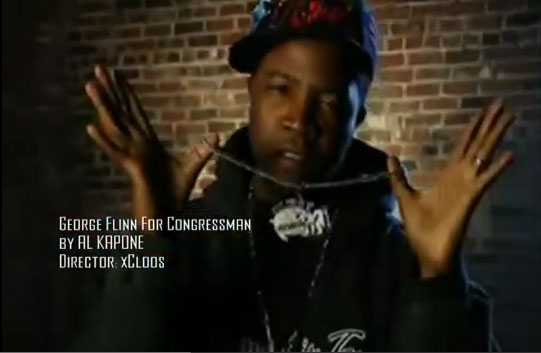 Memphis rapper Al Kapone has released a music video in support of Republican George Flinn who is running for Congress in the 9th District of Tennessee, facing off against the current US Representative of Tennessee’s 9th congressional district Democrat Congressman Steve Cohen this 2012 Elections. Al Kapone, whose real name is Alphonzo Bailey, is known as a legendary rapper with underground success in the Memphis hip hop scene in the 1990s, and also as the writer/producer of the infamous Hustle & Flow movie track “Whoop That Trick” performed by DJay (actor Terrance Howard). Kapone also had a solo track “Get Crunk, Get Buck” and wrote “Hustle & Flow (It Ain’t Over),” both from the Academy Award winning Hustle & Flow film as well. Watch the music video for ‘George Flinn’ Campaign Ad by Al Kapone featuring DJ Paul.