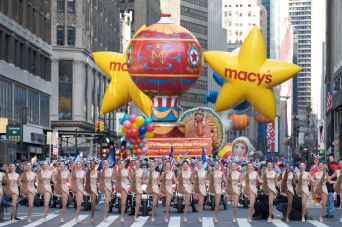 (CNN) Another year of magic kicks off Thursday morning at the 87th Macy’s Thanksgiving Day Parade, with its signature giant balloons, whimsical floats and performers taking over the streets of New York City, but a couple of displays are generating some controversy.

From its modest beginnings in 1924, the annual parade has become a holiday tradition featuring some of the world’s most beloved characters and attractions.

In all, more than 50 balloons — including Christmas SpongeBob Squarepants, Finn and Jake from “Adventure Time” and Toothless from “How to Train Your Dragon” — and nearly 40 floats will roll down the streets, with new additions from Cirque Du Soleil, “Despicable Me,” Royal Caribbean, Lindt Chocolate, and SeaWorld — whose float is being met with protests.

Animal rights activists, including members of People for the Ethical Treatment of Animals, say they plan to protest SeaWorld’s “A Sea of Surprises” float Tuesday at the New Jersey location where the floats are built and stored.

“This planned float is deceptive in the extreme because it shows orcas frolicking in a magnificent sea alongside their families when really we all know now that SeaWorld deprives orcas of all these things,” Ashley Byrne, a spokeswoman for PETA, told CNN.

The documentary “Blackfish,” which recently aired on CNN, examines the safety and ethics of keeping killer whales in captivity. The film profiled Tilikum, the whale that killed a trainer at SeaWorld in 2010.

PETA has released an online petition asking that the SeaWorld float be removed from the parade. According to Byrne, more than 80,000 people have already signed it.

“As far as what happens the day of the parade, it remains to be seen,” Byrne said.

Joan Jett & The Blackhearts were scheduled to sing atop a South Dakota tourism float, but the band was removed from the float after protests that Jett, a vegetarian and PETA advocate, was representing the state where cattle are important to the economy.

“Farming and ranching are primary drivers of South Dakota’s economy. Many livestock producers expressed concern about whether Joan Jett was an appropriate representative for an agriculturally oriented state like South Dakota,” Jodie Anderson of the South Dakota Cattlemen’s Association told CNN.

It is unclear on what float Joan Jett & The Blackhearts will perform Thursday.

“I’ve decided to switch from South Dakota to another float because people’s political agendas were getting in the way of what should be a purely entertainment driven event,” Jett said in a statement this month. “I will remain focused on entertaining the millions of people watching, who will be celebrating a great American tradition.”

In the past, Macy’s Inc. has avoided controversy at the parade.

“The Parade has never taken on, promoted or otherwise engaged in social commentary, political debate, or other forms of advocacy, no matter how worthy,” a spokesperson for Macy’s Inc. said in a statement. “Its mission has always been about entertaining millions of families and spectators.”

More than 3.5 million people are expected to line the parade route.

Another 50 million are expected to watch more than 1,600 cheerleaders, 11 marching bands and 900 clowns from home.

Jimmy Fallon and The Roots, The Goo Goo Dolls, Gavin DeGraw and Fall Out Boy are among the scheduled performers.

Despite recent controversies, Macy’s “will remain steadfast in following the guiding core of a decades old mission, celebration and entertainment for all.”