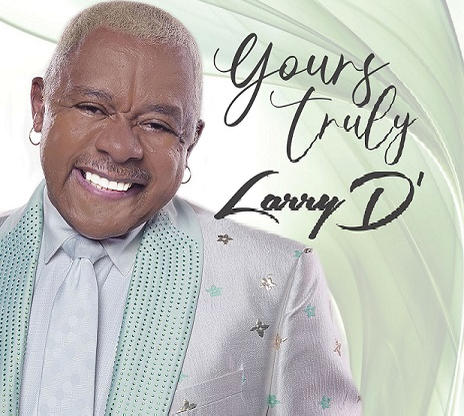 Memphis, TN – Music Moves Records recently hosted listening parties for multi-gold and platinum-selling singer, songwriter, and producer, Larry Dodson also known as Larry D. in support of his full-length album Yours Truly, Larry D. Fans and industry executives gathered at Di’Vine House in Nashville; APEX Museum in Atlanta; and at WAVN Studio in Memphis for the intimate events where they were treated to an early listen of the 11-track album featuring singles “I’m Good” and “Just We.” Yours Truly, Larry D. became available everywhere on May 20 on Music Moves Records.


Larry D., who was the lead singer of The Bar-Kays for almost five decades, is releasing his first album as a solo artist. In celebration of this milestone achievement, fans and R&B/Funk music enthusiasts were invited to a release party that was held May 20 at Timeless Event Center at 6662 Winchester Rd. in Memphis from 6 p.m. to 9 p.m.

The highly anticipated album is based on a love story, Larry D.’s love story. It is sure to speak to lovers and fans around the world with its uplifting lyrics and often mesmerizing textures while calling attention to the peppery sounding voice that is known and loved from Larry D. While listeners will be emotionally engaged with the lyrics, often intensely so, they will also be intrigued with the tracks and the variety on the album from ballads to mid-tempo to dance music.

The Atlanta listening party was attended by entertainment and music industry executives such as Memphis native Grammy Award-winner Drumma Boy. “The entire album was like a party,” said the multi-platinum super producer.

Half of the album was produced by Grammy-nominated producer Wirlie Morris who produced for artists like Charlie Wilson, Lloyd, Charlotte Church, Norman Brown, Boys II Men, Johnny Gill, Xscape, Keith Sweat, Destiny’s Child, and many others. Features on the album include Jessica Ray and Tyke T. Super producer Blac Elvis produced a song on Larry D’s new album as well. He produced “Better Than Me” featuring Michael Cooper of Con Funk Shun whose song “Love Train” was recorded by R&B super duo Bruno Mars and Anderson Paak of Silk Sonic who also performed the cover of the classic hit at the 2022 Billboard Music Awards.

The original lead singer of one of the most influential bands in history will be live in concert in Memphis in the Classic R&B and Funk Tour on June 18. Fans can enjoy Larry D. performing his new hit singles and hits from the past at The Showplace Arena at the Agricenter. Joining him on tour will be the Mary Jane Girls, Klymaxx, Brick, Bunny Debarge, and Yarbrough & Peoples. Tickets are on sale now.

ABOUT LARRY DODSON AKA LARRY D.
Larry Dodson also known as Larry D. is a multi-gold and platinum-selling singer, songwriter, producer, and author who for almost five decades was the lead singer of one of the most influential funk and R&B bands, The Bar-Kays. Larry D.’s career has rewarded him with 20 top ten singles, 10 top ten albums, five gold albums, and one platinum album from the 30 albums that he has recorded with The Bar-Kays. He released his first book, “And the Band Plays On: The Life Story of Larry Dodson” in September 2017. After returning to the stage, he is now touring as a solo artist. His first album as a solo artist was released on Music Moves Records, a record label started by him and his son Larry Jr. Having been inducted into the R&B Hall of Fame, the Memphis Music Hall of Fame; and honored with a music note on world-famous Beale Street in Memphis, and with pieces of his stage garments exhibited in Stax Museum, the Smithsonian Institute, and in museums all over the world, Larry continues to leave his legacy in the music industry. He is truly a musical icon. He also gives back to his community and is an advocate of Historically Black Colleges and Universities (HBCUs) and the Down Syndrome Association. In 2019, he received an honorary doctorate degree from LeMoyne Owen College, an HBCU that he supports with the annual Allen Jones/Marjorie Barringer/Bar-Kays Scholarship. In 2020, the city of Memphis honored Larry Dodson by renaming the street in a community he lives in as Larry Dodson, Sr. Road in celebration of the legacy of the original lead singer of The Bar-Kays and the community hero. For more information including upcoming tour dates for Larry D., visit thelarrydodson.com.