While visiting a local Walmart in the Whitehaven neighborhood in South Memphis, TN, Dominique Payne (who was accompanied by her four children) somehow dropped her keys to her car on last week. When she noticed that her keys weren’t in her possession for her white 1997 Toyota Corolla, it was too late because someone had taken her car.

Dominique Payne contacted authorities after realizing she didn’t misplace her car and Walmart pulled up surveillance video to find the alleged car thief who took the car, instead of turning in the keys. The thief was identified as a woman with a small child.

Payne questioned the woman’s motherhood, after driving around with a young child in a stolen car, stating to Fox, “You can’t basically say that you’re a mother if you do things like that.”

Currently Dominique Payne, who needs her car for work and to take her children to school, is catching a ride from her mother.

The stolen car license plate DFZ-908 is Mississippi tags. If you have information or have spotted the car, contact Crime Stoppers at 901-528-CASH or text AWARD to CRIMES (274637). 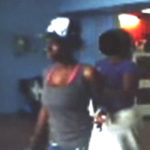